Another year, another Pride...

Okay, it was only my second, so I can't get too blasé about Pride just yet.

This year I was near the front, in the midst of people from QT Notts, NTH, and BiTopia, marching behind, and in solidarity with, QTIPOC Notts – and that for numerous reasons, as outlined on this banner... 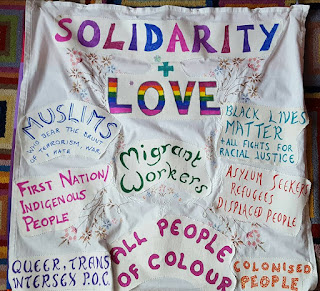 ...including, but not limited to, solidarity with our own in the LGBT community:
— queer people at the intersection of multiple oppressions, based on race, religion, sex, gender, sexuality, etc.
— trans women of colour, who were on the front lines at the Stonewall Riots that kick-started this whole thing; and who are statistically most at risk of hate crimes and murder.
— the queer latinx community targeted in Orlando, for whom the march stopped halfway for a minute's silence.

Although all that strikes a (necessary) sombre note, more than anything Pride is a celebration. Latin rhythms led the parade, beat out by drummers from the Nottingham School of Samba (I wouldn't mind doing that; I used to be a drummer). And there was dancing and chanting – “we're here, we're queer, we'll never disappear”, and whistles and more drums and more percussion, and banners and flags and balloons and streamers, and all kinds of rainbows. I now possess a fabulous rainbow feather boa (a rainboa?) courtesy of a kind woman along the way.

And there was an even stronger trans presence, it seemed, than last year. Chameleons and Invasion were again out in force, their huge banner leading the main body of the march behind the fire engine. And there were trans flags everywhere – including a trans flag sponge cake on the Chams stall. Yum :)

5000 people turned out, so the media said – as in this piece for ITV News, complete with pictures.

And here's another one – me from behind with a “Bi erasure” placard: 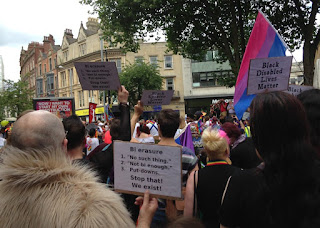