Two years (or so) ago I wrote about ‘Writing’; or, more accurately, about having finished writing something (always the best part of writing, I find) and sent it off: my submission to Queer Feminine Affinities.

QFA does seem to be going ahead now. There was a related ‘Queer(ing) Femininities’ workshop at Goldsmiths college in London last week (check the tweet stream for more on this); and the further "call for papers" at Feral Feminisms deadlines at the end of June. After that, I guess the editors (Alexa and Vikki) will put it all together, though it'll probably be quite a while yet before QFA finally appears – for one thing, that was CFP #8 and the published issues of FF have only reached #5 so far.

In the meantime I've been offered the chance to contribute to two other planned anthologies: one on crossdreaming and stuff; and another about “living life with a non-binary gender”, focusing on “relatable storytelling from a personal standpoint”. But I'm finding it hard. I've had the second proposal for several months and still have the figurative blank sheet in front of me. Because, what is there for me to say, at least that I haven't already said? My gender "issues" (such as they are) are mostly internal, and my actual life is arranged so that they hardly impact on me at all. Working from home, sitting at the computer (editing and suchlike), I have no work-related problems; while in the wider world, outside the front door, my gender is read as male, with all its associated advantages. My gender expression, while somewhat femme, is not so outré that it causes me any trouble. In fact, people mostly just say nice things.

For instance, this is about as femme as anything I wear: 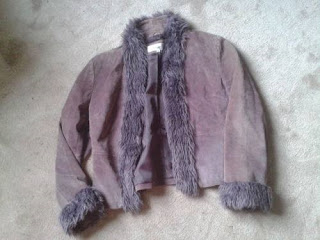 To my eyes that coat is pretty damn femme – one of my friends told me outright that it was “effeminate” (which of course made me happy) – and it does get serious stares sometimes, as if whoever can't quite believe it. Purple suede, furry cuffs and trim, cut short at the waist, it's clearly not a "man's coat". All the same, it is still just a coat. It's not a skirt. It's not a pretty frock. Nobody is sufficiently disturbed by it to give me grief; and I'm certainly not going to complain about that.

On the other hand, it does all mean that there's nothing much for me to say. I can't write about the difficulties day to day of living life with a non-normative gender, because I don't really have any. (There's privilege for you and then some.) No interesting, amusing, moving, inspiring, or even ordinary tales to tell. Nada.

So I'm stuck. Not writing.