"Reading" can have a different meaning in my (our) world. It goes with "being read", being perceived behind (or beneath) what you're presenting to who you "really" are. It has to do with pretence and privilege. Pretence, as in believing we're pretending, not who we say we are, not who we think we are. Privilege, as in taking your own self for granted, as "normal", and assuming the right, therefore, to define what's "real" and what's not for the rest of us, and mean it. Fuck that shit. You don't get to tell us who we are or what we're about. Only we get to do that. And you can fucking stand still for it.

But actually I didn't mean that kind of reading. (Nor the unitary authority in Berkshire.) I meant simply reading, as in reading books, articles, essays, blogposts – all towards my planned submission to Queer Feminine Affinities next month. Okay, I haven't set anything to paper yet, but it's taking shape in my mind, as to the slant I think I'm going to take. In particular, I think it has to be first person singular, not plural; "I", not "we". And as Dorothy Allison writes (quoting Bertha Harris) in ‘Skin’: “The things you hesitate to talk about, those are the things you should be writing about.” Which means I'm probably going to have to write about sexuality, and not in abstract terms. Hmmmm. I think I need to think about that some more.

Meanwhile, here are a few incidental items arising from my research:

1) Reading ‘Persistence: All Ways Butch and Femme’ directly after the anthology which inspired it – ‘The Persistent Desire’ – is quite revealing. In the nineteen years between, the world has changed. Meanings have broadened. People's identities are more complex and complicated. But then Joan Nestle always said they were anyway.

2) And this photo by Del LaGrace Volcano (in ‘Femmes of Power’) of London queer femme performer/impresario, Bird la Bird. 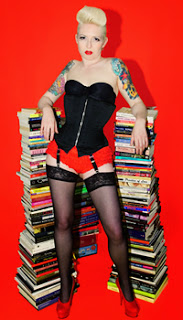 I just love the framing of that photograph. The red background. The red heels. The red ruffles! The powerful in-your-face femme. And (relevantly here) the piles of books which indicate it as being very queer. You can't see the titles in this small sized version, but they contain pretty much every book I've been rereading, and many many more besides.

3) And from the blogworld, this piece by queer butch, Sinclair Sexsmith: ‘Is genderqueer (or butch) a stepping stone to transitioning?’ As I commented there, I relate to this very strongly, albeit coming from the “other direction” (in the dubious binary sense). In particular, when they write:

“Being seen or treated as male doesn’t feel important to me or my sense of self, at least not currently. I reserve the right to change my mind on that at any point, if and when it shifts, but that’s been true for almost fifteen years now, so I am starting to relax into thinking it will remain true for a while. Butch feels good. Genderqueer feels good. Trans feels good, but mostly as an umbrella descriptor, as a community membership. More trans-asterisk (trans*) than capital-T Trans, but either are okay.

So, is genderqueer a political identity for me? Fuck yes it is. (...) It is a radical, political act to reject the two-party binary gender system, and I like radical acts. I get off on ’em. It also feels like home in my body in a way my body never felt like home when I was dressed up more femininely, and never felt/feels like home when people refer to me by he/him pronouns.

I am heavily invested in butch as an identity all its own (...) not only politically, not only for other people, but for my own sake. I am invested in my butch identity. Am I going to always be butch? I don’t know. Do I have secret longings to be male that are unrealized? Not currently, from the best that I know about myself, no. Do I reserve the right to decide otherwise in the future? Fuck yes.

I only speak for myself, but I, for now, am eagerly comfortable and loving the in-between of genderqueer.”

Switch the genders round (male-female, butch-femme, feminine-masculine, etc) and that's pretty much me right there :)
Posted by Jonathan at 17:14 No comments: