Talking of looking at other people's clothes, I'm currently re-watching the complete run of Sherlock Holmes on DVDs. The Granada version, that is, starring Jeremy Brett, who is the best ever Holmes, no question about it. Followed perhaps by Basil Rathbone. (Nuts to Benedict Cumberbatch.)

Anyway, as a sort of period drama, or a period detective series at least, it's all in appropriate period costume. The men are all in their period suits and waistcoats; while the women are all in their period dresses with huge skirts. I know which I prefer. Okay, the bodices might sometimes be a bit tight, and the period corsetry is probably uncomfortable. But just for the look of them, I have to ask myself: why would anyone of whatever gender want to wear these suits rather than these dresses? 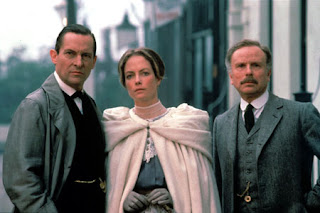 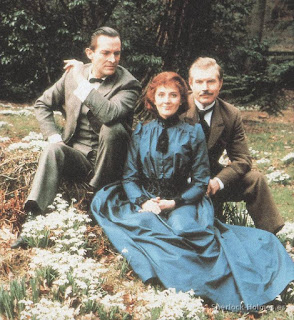 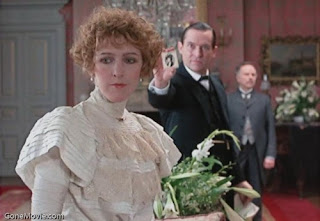 Pictured there from the top with Holmes and two different Watsons are: Mary Morstan, Violet Hunter, and Lady Hilda Trelawney Hope. Well, yes, Holmes is quite dapper too. But never mind that...

More generally, seeing as I have no urgent desire to dress up in Victorian or Edwardian costume, I'd also ask (rhetorically): why would anyone actually choose to wear clothes off the men's racks, when they could wear clothes off the women's racks? When the latter are so much more colourful, so much more varied and more interesting in every way. (Yes, I can think of several reasons too, including trans-related ones, but never mind that either...)

The constant gendering of stuff is silly. As Grandma Walton once said: work is work. And as she almost certainly wouldn't have said: clothes are clothes. Which brings me to something I wrote back in 2011:

I was pleased by those assertions, despite not being totally convinced then of their correctness. Six years on, they strike me as utterly banal. Clothes are clothes, and I'm coming round to the viewpoint that people (especially men) who limit themselves to their "designated" clothes are just plain weird.

And, incidentally, I have a new coat: 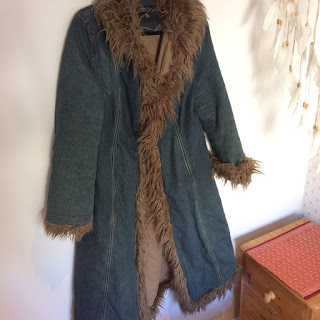