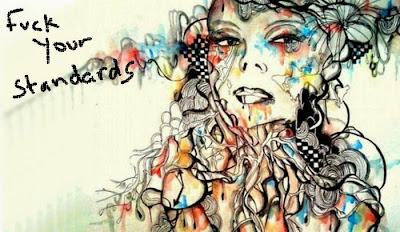 ‘Radical Femme’ is a Facebook community/group/page created in April 2013 with the tagline: “How many femme groups or pages have YOU seen on Facebook? Let's put an END to femme invisibility! All things femme - right here!” Or as the founder further described it: “a femme-centered queer feminist page that welcomes femmes of all genders!”

Last October/November she put out a call for new admin. When I asked what admin-ing involved, she explained that: “It mostly means loving and nurturing the page! For example - curating content (or, of course, writing original posts). And then - sharing the posts far and wide, as well as sharing the page itself in various places to get more readers/likes. If there are discussions in the post threads, it means moderating them as needed - make sure no oppressive behavior or hurtful language is being used and ban trolls as necessary.” Okay, I can do that – so I offered my services and was subsequently added to the editorial "staff".

So far I've stuck to “curating content”, posting items of possible interest and sharing them here and there. Yes, we could just post this stuff on our own "Timelines", but I think it's nicer to have a group (or page). They're the Facebook equivalent of forums, and I like forums. Instead of the insular world of FB "Friends", a forum is anybody who joins, which leads to greater diversity and, potentially, to more lively discussion. Not that there's a whole lot of discussing going on at Radical Femme at the moment (so I've not had to do any moderating as yet); people mostly just come and Like things. And as you'd expect with social media, visual content with a strong caption is the most popular – look, read, Like, (perhaps) Share, done.

Here are a few links I've "shared" to date:

‘What is femme anyway?’ by Iris @bossyfemme;
‘No Queer Girls are Queerer Than Others: Resisting Femme Invisibility’ by Jeannette Young;
‘Men in makeup: lawyer by day, glamour puss by night’ by Seán Faye;
‘Where Are All the Young Femme Lesbians? We Are Right Here!’ by Megan Evans;
‘Exploring Trans* Femininity with Will Brower’ by Annie Malamet;
‘It’s Time to Smash the Stigma Against Male-Assigned People Expressing Femininity’ by Leela Ginelle.

And a couple of quotes from those:

Femmes have theorized our own feminist understandings of femininity. We know that the construct of “femininity” is often exclusionary because it has been defined according to certain standards of white, heterosexual, middle-class, able, and cisgendered (non-trans) female bodies of a certain size and shape. For some queer people who don’t fit into these categories, identifying as femme allows us to access, reclaim, and redefine femininity on our own terms—in ways that are incredibly empowering.
— Jeannette Young.

It’s supposed to be fun: the range of style options available to men is already woefully narrow. Wouldn’t a world in which getting ready for a night out was about more than picking from a cupboard of identikit Zara shirts be more thrilling for everyone? Guys, believe me, there’s no quicker way to shake off the fog of the working week than a smoky eye and a nude lip. If you’re looking for a simple starting point, just put a bit of dark brown eyeshadow along both lash lines. Don’t you feel sultry already?
— Seán Faye.

If any of this seems interesting and/or entertaining – and especially if you identify as femme – click on the initial link above and Like us yourself :)
Posted by Jonathan at 09:52 No comments: