The whole world is going down the fucking toilet. Everything is just shit and it's getting increasingly worse, it seems to me, increasingly. I can't even begin. Shit, shit, every where, nor any way to avoid it. You'll be drinking it whether you will or no.

From this super happy place, I've found myself thinking a lot about... 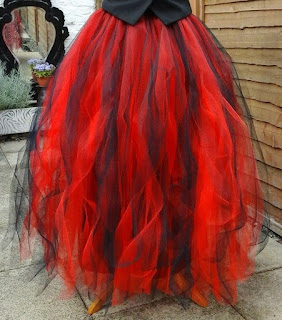 Isn't that gorgeous! Who wouldn't want to wear a skirt like that? Even if it won't look quite so good on you. Or me.

Now I just need an occasion to wear it out. My youngest niece has suggested her wedding. Maybe :)

The last time I wore a skirt out was twelve weeks ago at the NTU Gender Matters conference. Finn Mackay was the keynote speaker, so presenting femme by wearing a skirt – a long purple one, paired with a they/them/theirs t-shirt in non-binary colours – seemed the least I could do. To show solidarity with my butch sibling as it were.

Now I'm thinking about wearing skirts all the time.

That is to say: I'm thinking all the time about wearing skirts. Or even both. There's a punk gig coming up on Saturday. I could wear my new skirt to that. And there's another gig on Thursday. I'd probably have to ask my mate first. Would it bother you if I wear a skirt? Maybe.

In the words of the song: I don't have any reasons. I've left them all behind. I'm in a new skirt state of mind.
Posted by Jonathan at 14:27 4 comments: