Actually: sissy comma femme. That is: “sissy, femme, queer, and proud”, the title of a chapter in Jacob's book: ‘Sissy: A Coming-of-Gender Story’. I've reduced it to “sissy femme” because... well, just because I wanted to add it to that list. I like lists.

But the key word this time isn't “femme”, it's sissy, which is a label I've been trying on for size lately. I've even got the t-shirt: 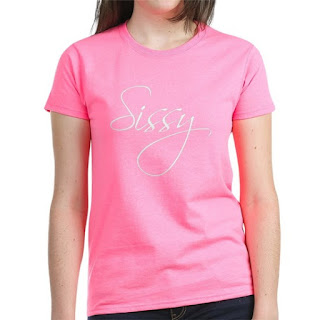 As with all reclaimed words, there's a proper fuck off quality to it.
Sissy as in fuck off – channelling “femme as in fuck you” (if you know that expression?)

It also has multiple connotations, something Jacob alludes to in their book:

I used to think that my gender was a voyage that needed a destination, but as I've gotten older, I've come to embrace that my gender is more like an onion. It doesn't have a center, a core, a discernable middle. It's layer upon layer upon layer, veiled beneath a thin skin. Sometimes the act of peeling apart the layers (...) can make your eyes sting. (...) But each layer is meaningful, and with enough time and proper preparation, each layer is delicious.

In other words, our genders are often plural, revealed slowly and delicately, rather than being fixed and singular.

When a person hides in The Closet, we act as if it is their responsibility to come out. But when a snail hides in its shell, we don't delegate responsibility the same way. A snail only hides in its shell because the world outside feels hostile. If a snail recoils at the sight of you, it's not because the snail is cowardly or lying or deviant or withholding, it's because you've scared it.

That instead of a closet we're obliged to escape, we have ornate shells for our required protection, usually ones we've grown from childhood. Yes, a snail may well be happier shuffling along with its head out. That doesn't mean it wants to discard the shell entirely and be a slug. So I'll keep my shell too, thanks.