A current debate on the mHB message boards (in which I've been trying to propagate my view of male cross-dressing as femme) has had me thinking (tangentially) about how feminist-informed women perceive of male cross-dressing and, from there, how feminism perceives, or has perceived, of femme expression in general. The following is an attempt to summarize my (ongoing) thoughts in a coherent way...

Femme and feminism have often been uncomfortable companions and the reason for that is not hard to apprehend. Prior to feminism (in particular, the second wave) women were generally expected to dress in a certain way, behave in a certain way, conform to the oppressive gender rules laid down by a male-dominated society. Among the many achievements of the feminist second wave, one was to say a resounding "no" to all this. And the importance of their (albeit partial) victory cannot be overstated. Freedom (including gender freedom) means nothing without the ability to say "no".

Eventually femme feminists themselves said "no". We are not puppets of the patriarchy; we are not perpetuating gender stereotypes. We are informed by feminism and we choose this form of gender expression. ("Refusing the fate of Girl-By-Nature, the fem(me) is Girl-By-Choice" – Lisa Duggan & Kathleen McHugh in their Fem(me)inist Manifesto again.) We choose it because it expresses an essential part of who we are: femmes. In this, lesbian femmes (Joan Nestle, Madeline Davis, Jewelle Gomez, Amber Hollibaugh, Dorothy Allison, Minnie Bruce Pratt, ...) have been in the vanguard: because femme is also about sexuality, and the denigration of femme (and butch) struck at the erotic heart of their lives. Now, in the 21st century, there is a burgeoning femme pride, albeit still in the leftfield of queer and (trans)gender debate.

Nonetheless, the battle fought by the feminist second wave, the freedom to say "no", remains important (especially as that freedom seems once more to be being eroded – for an exposition of this topic see, for example, Natasha Walter's recent book ‘Living Dolls’). Because not all women are femme. It's not possible even to say "most" women, even in the simple majority meaning of the word. (As to the actual proportion – majority, minority, large or small – who can possibly say.) But it doesn't matter anyway. All that matters is that some women are femme; that they have the right to choose femme expression for themselves; and, equally, that other women have the right to choose otherwise.

Having got thus far, it is not much of a leap to realize that such gender freedom might also be necessary for men. That some men are femme, too, and have the same need to express it. And that, in doing so, those men are not necessarily maintaining gender based oppression, and are not just acting out their own stereotypical, hyper-sexualized visions of women. Rather, they are appropriating the major cultural signifiers of femme (women's clothes) and using them to express their own femme personalities. Or so it seems to me. Even if most such men would probably not explain themselves in anything like those terms.

Regarding men's ability within society to express their femme, that is perhaps another question – or perhaps, another battle. At present western culture is barely tolerant of male femininity (in whatever form it takes: trans, femme, sissy, ...), but to some extent at least this is our own fault. Women did not gain such gender freedom as they do have without fighting for it. As a wife of a cross-dresser (quoted by Helen Boyd in ‘My Husband Betty’) put it: "We had to burn our bras. You're going to have to wear yours in public." In the light of everything I've just written, that seems a very pertinent comment.
Posted by Jonathan at 15:02 No comments:

So, what is femme?

I'd really like to answer that question, but femme is an elusive quantity and as such is difficult to define.

We cannot begin with a definition; we cannot offer assurances of any kind. For "fem(me)" is not an identity, not a history, not a location on the map of desire. The fem(me) body is an anti(identity)body, a queer body in fem(me)-inine drag.

— from A Fem(me)inist Manifesto by Lisa Duggan & Kathleen McHugh.

What cannot be seen, what cannot be held or pinned down, is where femme is (...) Femme is inherently "queer" – in the broadest application of the word – as bent, unfixed, unhinged, and finally unhyphenated. Released from the strictures of binary models of sexual orientation and gender and sex. Released from a singular definition of femme.

— from the introduction to Brazen Femme by Chloë Brushwood Rose & Anna Camilleri.

Interestingly, and significantly for me, in the same piece Brushwood Rose and Camilleri relate a "pivotal acquaintance" with a man they call "Jim":

And then we met Jim. A straight man. A femme. Jim lived and worked as a man. Jim also lived and worked in what most would describe as "women's clothes", but what might also be described as "high femme" clothes. Many people would call Jim a transvestite. Jim called himself femme.

Our brief but pivotal acquaintance with Jim helped us think about the common dangers and pleasures of femme as an experience that is informed by and also exceeds lesbian herstory; as a way of being that cannot be described as quintessentially feminine. Instead, femme might be described as "femininity gone wrong" – bitch, slut, nag, whore, cougar, dyke, or brazen hussy. Femme is the trappings of femininity gone awry, gone to town, gone to the dogs. Femininity is a demand placed on female bodies and femme is the danger of a body read female or inappropriately feminine. We are not good girls – perhaps we are not girls at all.

As for the original question: I guess I'll return to it in subsequent posts.
Posted by Jonathan at 21:54 1 comment:

Not woman, but femme.

Helen Boyd's My Husband Betty is one of my favourite trans-related books, in particular for the way she elucidates the difficulties faced by female partners of male cross-dressers. But on rereading it (yet again) a few passages have already (I'm up to page 51) stuck out:

(p14) how insulting it could be when your husband, in professing a desire to "feel like a woman," dressed in clothes that to you made him resemble someone you'd call a slut.

(p44) I don't really buy the argument that men who crossdress are getting in touch with their "inner woman" because they so rarely have any interest in the actual lives of women. What they are interested in is their own expression of their own version of femininity, which is a whole different thing altogether. What I see and experience and hear about is closer to that idea than any other, that crossdressers are men, with men's notions of what women are, who then choose to express those male-centered ideas about femininity in a very masculine way. They don't help with the laundry or make dinner, they don't train themselves to make more room for others' needs than for their own. They continue to be the same guys they always were, in dresses.

(p45) men understand their own "femininity" as men, and they know women through their own men's eyes. That may be why some crossdressers portray such a sexualized image of women when they dress as them. It may also be why their notions of femininity seem a little absurd and outdated.

The trouble arises, I think, from the use (by cross-dressers themselves) of "woman/women" in those passages: "inner woman", "feel like a woman" – what do those statements even mean? They imply that "woman" is some unifying category, that every woman has the same feelings, experiences, needs, desires, etc, which is blatantly silly. Rather than "feel like a woman", it would be far more meaningful to say: "gain access to certain feelings that our society restricts to women".

And those feelings are femme feelings. Thus we can rephrase the above accordingly: "inner femme", "feel like a femme", "portray such a femme image", and so forth.

The correlation of "femme" with "woman" is familiar but false – clearly, because a lot of women are not femme. I'd guess that, as a woman with tomboy leanings, Helen herself is not femme. So she wrote (p14): "dressed in clothes that to you made him resemble someone you'd call a slut". Correction please: not a slut – femme. And quite likely high femme – often a cross-dresser's needs and feelings have to be relieved in only occasional outbursts, leading him to (over)compensate by upping his femme.

Incidentally, this also explains why (cf p25) the cross-dresser "devot[es] endless hours to ritualized crossdressing" instead of "taking care of children or cleaning the house". That is, because the cross-dresser's need is not to "be a woman" (whatever that might mean) but to express his femme. And taking care of children, cleaning the house – helping with the laundry, making dinner – have nothing to do with being femme. Indeed, they have nothing as such to do with being a woman either. They're merely gendered tasks imposed on women by the prevailing (male-dominated) culture.

The point is that the word "woman" is misplaced, I think, in a lot of explanations about male cross-dressing. Change it to "femme" and the explanations make much more sense – at least to me.
Posted by Jonathan at 11:11 4 comments:

To show what I mean, here's a picture of an archetypal male femme: 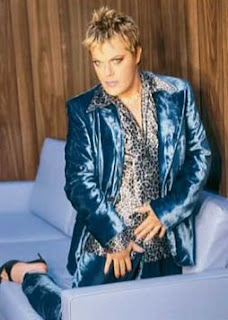 As far as I know, Eddie doesn't describe himself as a male femme. Instead, he creates his own personal labels: "an executive transvestite", "a male tomboy", "two lesbians trapped in a man's body", and other such esoteric and piquant nomenclature.

But "male femme" is also appropriate, I think. Notice that Eddie is making no attempt to pass. There's no sort of woman there, no disguise (for whatever reason) about who he is. There's just a man in women's clothes, looking good, feeling good, displaying his femme style. A femme man.