Nottingham 28th July. Last Saturday. My fourth Pride in a row. Which was apparently the biggest yet.

And there was a large trans contingent throughout. It seemed important to attend in view of the tiny but irritating anti-trans protest (ffs) at London Pride this year. In Nottingham the countless trans flags streaming in the breeze, supported by cis allies carrying “L with the T” and “Lesbians Against TERFs” banners, were a big fuck off to that.

But it all went off peacefully. And due to ongoing roadworks on Pelham Street, we got to parade along part of Parliament Street and hold up the traffic. Yay! It feels almost like a real march if we're inconveniencing people.

Here are some of us: 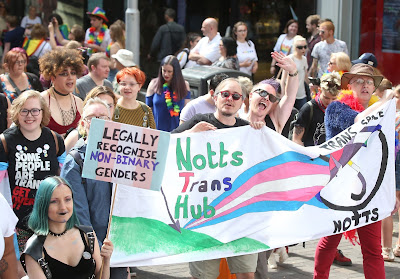 I was going to sign off there with “See you next year”, except that I've been out to quite a few things recently:

Perhaps I should write something about those sometime.

Briefly for now... I'm finding that cis feminist perspectives are of most interest to me at the moment. In the above events, those from Katharine Jenkins and Carrie Paechter. And elsewhere, from Sara Ahmed, Deborah Cameron, Sally Hines and Ash Sarkar. And Finn Mackay, who generously sent me a shiny booklet edition of ‘Raising Children: The Feminist Way’ (reciprocal donation to cat charity still outstanding). On which note, it's time I read Sandra Bem again. And I still have books by Sara Ahmed, Marilyn Frye, Surya Monro and Ellen Willis to read. And...