Leslie Feinberg, who identified as an anti-racist white, working-class, secular Jewish, transgender, lesbian, female, revolutionary communist, died on November 15. She succumbed to complications from multiple tick-borne co-infections, including Lyme disease, babeisiosis, and protomyxzoa rheumatica, after decades of illness. She died at home in Syracuse, NY, with her partner and spouse of 22 years, Minnie Bruce Pratt, at her side. Her last words were: “Remember me as a revolutionary communist.”

— from an obituary by Minnie Bruce Pratt, written at Leslie's bedside, and submitted to The Advocate. You can read the whole thing here. (Don't get hung up on the pronouns. Les accepted any pronoun used respectfully. I'll be using the gender neutral sie/hir here.)

Tributes to Les, to hir life and work, have been appearing all over, from just about everyone. My favourites are by Ivan Coyote and Sasha Goldberg, along with Sinclair Sexsmith's piece ‘Long Live the Butch’ and Kiki DeLovely's ‘Love Letter to Minnie Bruce Pratt’.

My own introduction to Les's writing was Transgender Warriors – “hir prideful book” as I called it, naming Les as one of my Inspirations in 2011 – and so it is. An autobiographical memoir of hir own journey, of hir own investigations into trans – into pan-historical, pan-cultural trans and other gender-variant identities – its slow diffusion of pride is very powerful. The book effectively says: we're not alone; we're not an aberration; we're here; we've always been here; we're everywhere and everywhen – get used to it. (Okay, the class politics which pervade the text won't be to everyone's taste, but you can always ignore those if you feel you must.)

Hir book of collected speeches and essays, Trans Liberation: Beyond Pink or Blue, is important too, not least (from my perspective) for hir speech to the 9th annual ‘Texas T-Party’, in which sie makes the connection between LGB and the specific T of (heterosexual) cross-dressers and (our) partners, asking in conclusion: “Have we reached the moment in history when this dialogue between our communities can begin?” That was back in 1997 and the question is still moot.

And then there's Stone Butch Blues, which was (and is) a hugely significant book for me. As I related in another post from 2011, it was largely through imagining myself as a mirrored version of the book's main character, Jess, that I began to understand myself as femme. Reading the various tributes, it seems many people have found themselves, their communities, their own and/or their lovers’ identities in Stone Butch Blues, which won Stonewall Book and Lambda Literary Awards in 1994. It's currently out of print, but the sort-of sequel, Drag King Dreams, is still available (“sort-of” because it isn't really a sequel; it just feels like one).

Dorothy Allison once wrote: “Writing is still revolutionary, writing is still about changing the world.” Through hir courageous writing and activism, Leslie Feinberg helped change the world for the better.

Thanks for everything, Les. 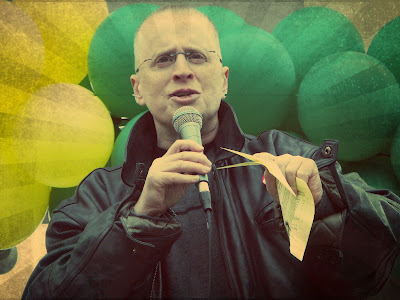 I'm not at odds with the fact that I was born female-bodied. Nor do I identify as an intermediate sex. I simply do not fit the prevalent Western concepts of what a woman or a man "should" look like. And that reality has dramatically directed the course of my life.
Posted by Jonathan at 16:08 6 comments:

The majority of young people who don't fit traditional gender norms are bullied. Bullied in the street, bullied at home, bullied at school – by pupils and teachers.

Gendered Intelligence is a groundbreaking British organization that provides support for gender non-conforming young people – no matter how they identify. Through young people's groups, school training, research and campaigning, they're already making a huge difference to the lives of hundreds of young people.

November 17th-23rd is National Anti-Bullying week here in the UK, and Gendered Intelligence have launched the Stop Our Silence campaign to raise awareness of gender-based bullying, to raise funds to run youth groups, and to show solidarity with all young people who are being silenced because of who they are.

There are two really easy ways that you can help.

Trans, cis, not sure, somewhere in between – everyone is welcome to lend their support. Just take a selfie holding a message:

“I was silent because...”
“They silenced me with...”
“I will never be silent again because...”
“Let's end the silence around gender-based bullying.”

Tweet with the hashtag #StopOurSilence to @GIYouthgroup and we'll keep the images rolling.

Gendered Intelligence members, family and friends are going silent to raise funds – even a small donation makes a hell of a difference. Or do your own sponsored silence? If only 100 people managed to get another 100 people to donate £1 each, GI would have £10,000 to fund their work.

On a personal note – I was badly bullied through school for being queer and trans – it happens so often it's almost a cliché. But it doesn't have to be like that – and Gendered Intelligence are working their arses off to change things.

Despite the fact that I don't really like selfies very much. I find them banal, use hide functions on other people's selfies almost automatically, and have never posted one here. But this is a selfie for a cause, so I'll be temporarily suppressing my natural negativity this Friday. Yes, that's this Friday. Get busy cru.

Now I just have to think up some text. Something beginning “I was silent because...” seems appropriate. Because I didn't suffer gender-based bullying at school. Not outward bullying from other people anyway. And that's because I was so completely silent about this stuff.

I've written about my own silence before – see the (rather pathetic) posts ‘Stealth’ (prompted by something CN once tweeted) and ‘14th August 2012’; the answer “Coming Out” in ‘Eight Questions’; and the somewhat happier ‘Second Anniversary’. No, I'm not a particularly good role model for not being silent. I'm still quite silent. Stay silent for 24 hours? Piece of piss ;) . But I don't feel as oppressed by my own silence now. 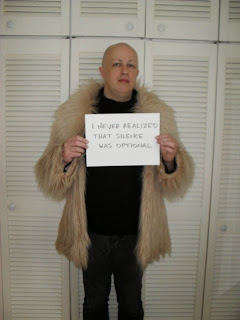