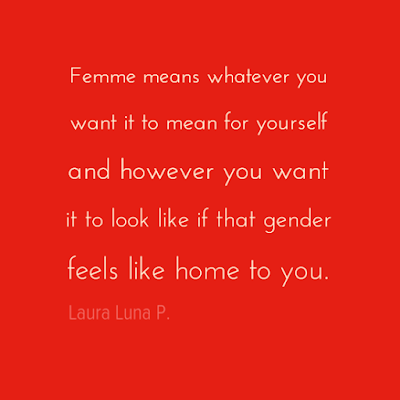 — Laura Luna Placencia, from the Los Angeles Femmes of Color Collective, in a joint interview with ColorLines news website.

An expanded (and edited) version was later posted on the Collective's tumblr page, where Laura Luna also offers this:

I am deeply inspired by the following quote by Jewel Gomez when asked to define femme: “I see femme as someone who is interested in living a life of adornment and affectation. It’s not a role but an identity, as in something embedded inside that manifests externally in many different ways.”

I'm not entirely certain what Jewelle means by “affectation” there, but the rest rings true for sure :)
Posted by Jonathan at 11:14 1 comment: