First of all, the title needs some qualifying. The adjectives "male" and "female" above refer to the usual cultural understanding of these terms – which is not necessarily correct, however. Or at least not always correct.

Take clothing, for instance: If someone (e.g. Michael below) refuses the gendering of clothing, then their "female" clothes effectively cease to be female. They are merely clothes which the local culture and history regard as female. Morphology (i.e. the body) might seem more straightforward, but if the person (e.g. Alex below) inhabiting a "male" body is not in fact male, what sex is their body then?

The important point is that the maleness and femaleness of things, such as clothing or bodies, is not a constant but depends on context. That which one person regards as female, say, may not be seen as such by someone else. They may regard it as male (opposite), or androgynous (either), or non-binary (neither), or not gendered at all (not applicable).

In a post (which I've quoted before) on his own blog, Andrew O'Neill writes: “I think I have a hardwired notion that it is desirable to be a girl. I also have over the years accepted and internalised the fact that I cannot be a girl. Therefore it is desirable to be like a girl, and because of our hugely gendered clothing split, the easiest way to achieve that is to wear the clothes of a girl. If I looked more feminine, I think I would probably act a lot more feminine, but as I don’t want to try and fail to pass for female, I ground what I do in an acknowledgement that I am male. The identity I project outwards is therefore feminine male, rather than woman. I want to dress as ME, not as something I am not.”

“I want to dress as me, not as something I am not” – I can certainly relate to that. And as a fellow transvestite, these are the questions I find persistent: Why does "feminine" presentation necessitate a female-looking morphology? Why aren't male-looking bodies sufficient?

Having just asked those questions, I don't intend to try and answer them right now, if indeed they can be answered. Ultimately, these are personal questions requiring individual and personal answers. Nevertheless, I'd like to suggest that the answers “it doesn't” and “they are” at least be considered as possibilities. To that end I'm going to show a few pictures of "female" clothes looking good on a "male" frame. The four "models" (Michael, Jasper, Andrew, Alex) identify quite differently – respectively, across the spectrum: freestyler, femme, transvestite, trans-female – but that's not actually relevant here. What is, is that all have developed a personal style that expresses who they are in an attractive and (potentially) inspiring way.

Have a look at the following photos and see what you think: 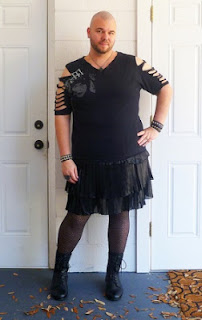 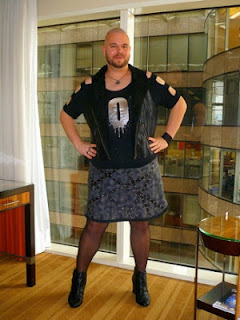 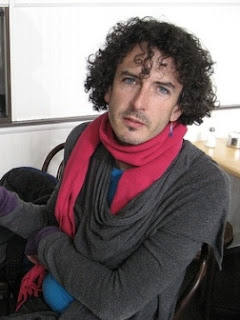 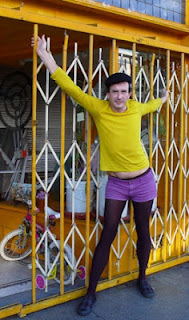 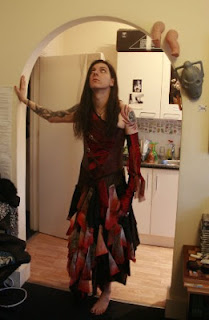 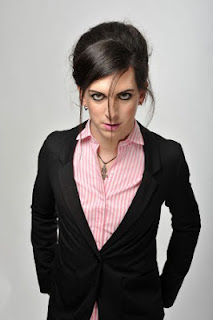 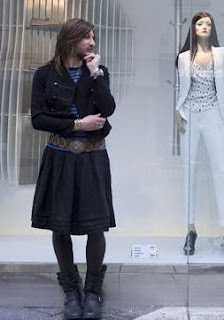 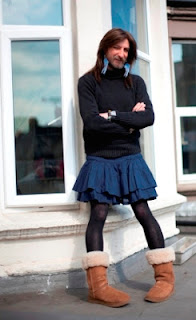 My thanks to Alex Drummond, Jasper Gregory, Andrew O'Neill and Michael Spookshow for permission (last November) to use their photographs.

Further material: Andrej Pejic, Liu Xianping, Stas Fedyanin. Either Andrej (who featured in ‘In vision (2)’) or Stas would have been an obvious choice for this post, but rather too obvious. We can't all look like supermodels. (And anyway, Andrej would look good in a bin liner.) The point is for us to look good with what we have, or, at the very least, make ourselves feel good – this, after all, being the real function of fashion.
Posted by Jonathan at 16:39